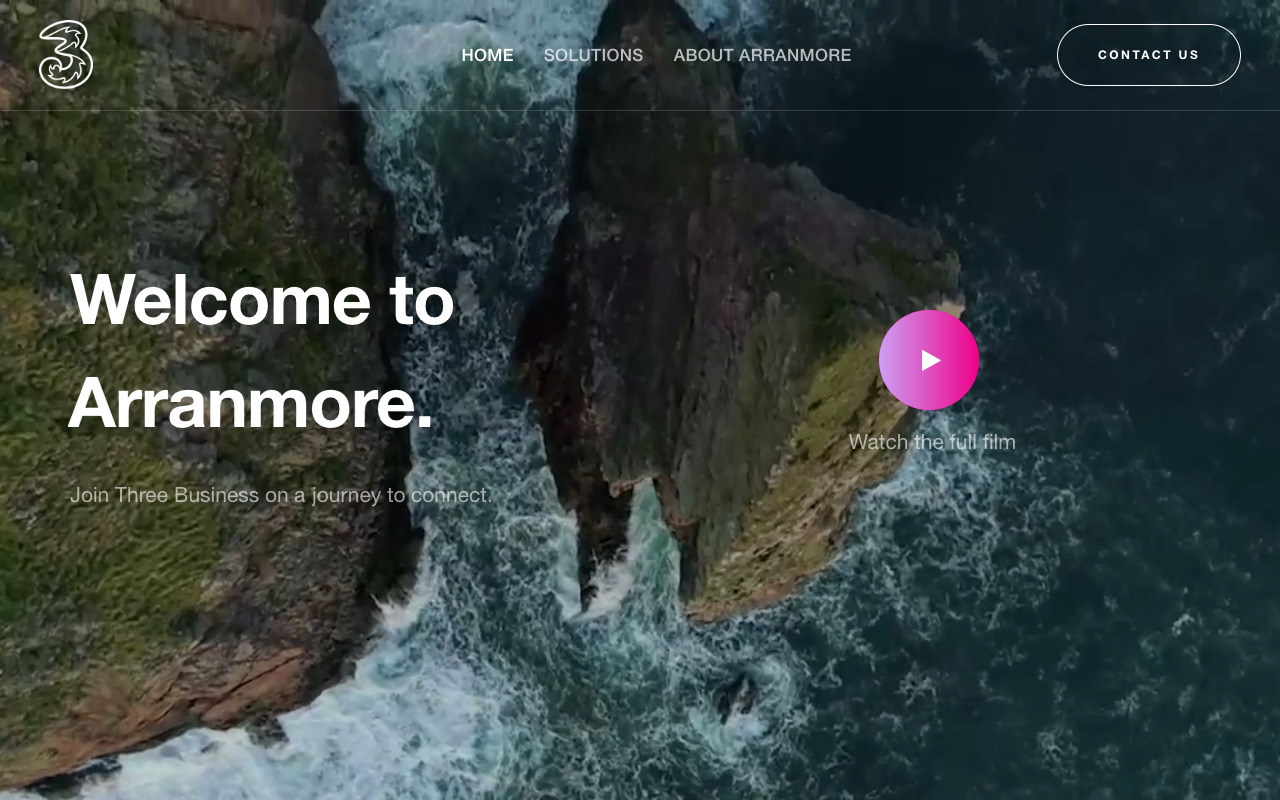 Visit Three.ie/theisland to see the site in action.

Arranmore Island, off the coast of Donegal is one of the most scenic places in Ireland. It’s also one of the most isolated. Due to a multitude of reasons, Arronmore is experiencing high emigration, but one issue of note is connectivity. Professionals wishing to work remotely, for example, are unable to depend on high speed internet so they have to move to the mainland or towards towns and cities.

The Three Business team, along with an external agency, approached the Arranmore board with an idea to help bring connectivity to Arronmore. You can watch the video below; it’s well worth a watch.

Three were going to Arranmore to document (video and photos) the months of activity on the island leading up to turning the big ‘ol connectivity switch on. They interviewed locals, got footage of football matches and got some amazing drone shots. The output of this was to be a short film (above) and a series of short ads to promote Three’s involvement but also the business services & products that were used on the island.

So my task was to distill all this down and create a website that tells the story of the island, allows people to watch the full film, while also making it a lead generation piece. The timeline on this was also incredibly short; About 2 and a half weeks and with no content until about the last week 🙂

Working with my colleagues in the Three Studio, and the marketing team, we set up a series of meetings to work out the content for the site. To eke out what needed to be in place to tell a cohesive story. These meetings were frequent and regular and during the course of them, we built a Frankenstein type mockup using different sections from various sites that we liked. There were some commonalities among the designs that we all agreed on. Big imagery, possible parallax (if it made sense), big headings overlapping imagery etc.

My colleague found a template on Theme Forest that did a lot of heavy lifting for us. It included some of the section types we needed, including parallax, but there was still quite a lot that had to be custom built on top of the template.

The video hero section, for example, was something I had to work out on Codepen. We were debating whether or not to have two versions of the video (portrait or landscape) but decided to just go for the one video but use object-fit: cover to insure it filled the screen no matter the orientation.

There were numerous amends over the final few days as new imagery landed or copy was edited but sure that’s part of the thrill, eh?

I have to say, that I’ve very happy with the result. Considering the very tight deadline and the uncertainty of what photos we’d be getting etc, it all came together very well.

There were nationwide television ads promoting “The Island” with the main call to action to go to the website which is a pretty great feeling.

The whole process was a pretty unique for Three too because it didn’t have to adhere to the component library that we normally use throughout the site. This could stand alone which gave us a great opportunity to do something great.